Back in 2009, 512 Koalas from across South East Queensland (SEQ) were tested to work out their genetic differences and to see whether habitat fragmentation is causing reduced genetic diversity. The study found that there are six distinct clusters of Koalas based on their genetics in SEQ (see map below), and yes, urbanisation is a contributor to reduced genetics, especially in the Koala Coast population.

Historically, it would seem that there were groups of coastal Koalas and inland Koalas with little exchange between them. Two hundred years ago, the Koala population of SEQ would have been at least several million whereas today it has been estimated at about 35,000 individuals. This huge decline has been largely caused by loss of habitat, fragmentation, roads, disease caused in part by stress, and the export of millions of pelts in the early 1900s.

The Koala Coast (Brisbane City Council area south of the Brisbane River, Logan City Council region east of the M1 and all of Redland City Council area) is one of Australia’s most significant Koala populations. A survey in 2008 estimated the Koala Coast population at only 2,279 individuals. The study found that Koalas in this region are genetically distinct from adjacent areas and that urbanisation has restricted gene flow. 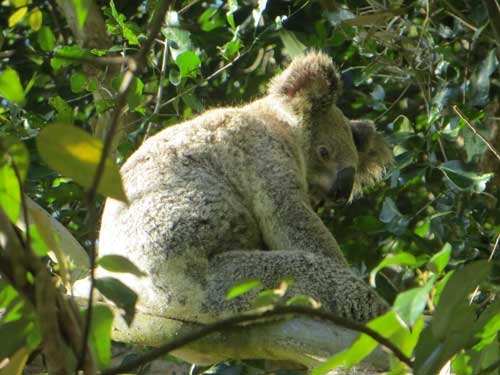 One response on “Meet Your Local Koala Cluster”