From a young age, I had a good knowledge of NSW wildflowers. After moving to Brisbane in 1967, Vernon and I developed an interest in butterflies and native plants. This was increased to a passion when we spent four years in North Queensland in the seventies. On our return to Brisbane in 1975 to our home in Fig Tree Pocket, our interest in butterflies and their host plants continued. 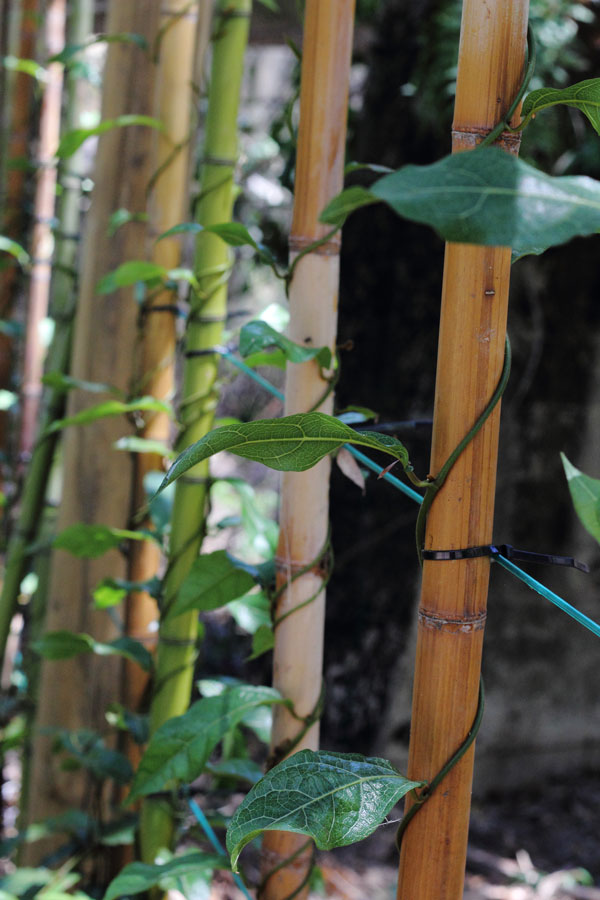 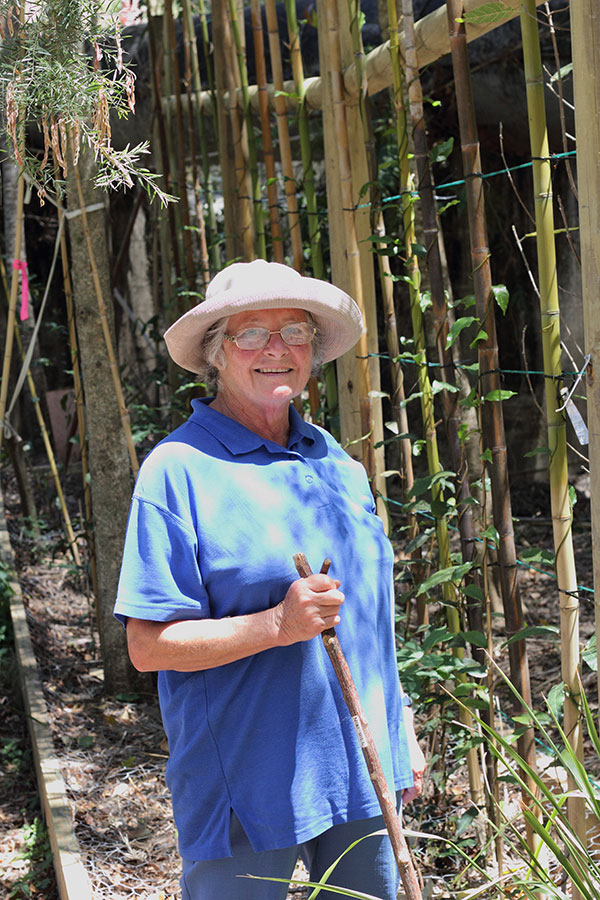 Every Richmond Birdwing Vine is tagged to record planting and watering dates and also rainfall events to help ensure their survival. Over 300 vines have been planted in Foam Bark Gully.

We firstly planted Pararistolochia praevenosa in 2007. The vines were grown by Chris Hosking and Richard Bull. Fourteen vines are still growing well, however two died in the 2011 flood.

In March 2013, I planted 70 seeds from my ‘stock’ vines. Fifty of these seeds germinated and survived their first year. These are being ‘potted on’ by a registered grower and many will be planted in habitat restoration programs.

After a visit from Don Sands in November 2013, we were asked if we would be interested in becoming more involved in Richmond Birdwing recovery activities. Our neighbours, Sylvia Alexander, Ian Yeo and Cherrell Hirst are also members of Land for Wildlife and they too started to plant vines. Combined, our three properties cover about four hectares and we have all been undertaking weed removal and bushland regeneration since early 2000.

An ephemeral watercourse runs through our properties and joins the Brisbane River.

“We live in anticipation of one day seeing an adult Richmond Birdwing butterfly here.”

The native vegetation on our properties is a mixture of sclerophyll open eucalypt forest, remnant rainforest and riverbank mangroves.

Don Sands suggested that this would be an ideal site for a concentration of Pararistolochia praevenosa vines to augment those already established. We were delighted to be nominated as the first rehabilitation corridor for the Richmond Birdwing in the inner western Brisbane area. Our site is named the Foam Bark Gully Birdwing Conservation Corridor and we have, with our neighbours, already planted 250 mature vines since March 2014. Our site is part of the Richmond Birdwing Conservation Network’s 1000 Vines Project.

All Richmond Birdwing Vines have been planted according to the recipe for success. Healthy plants from large 8 inch pots are planted into a combination of potting mix, dolomite and soil. They are then mulched and ringed with rocks or chicken wire for protection from brush turkeys. Each vine is given its own sturdy bamboo pole that will direct the vine towards suitable large companion trees. Vines climb up the poles in an anti-clockwise direction. Unless it rains, they are watered three times a week and fertilised with soluble fertiliser.

On average, the vines have grown at least one metre in seven months! Some have already reached a height of four metres and are in the lower parts of the canopy.

In addition to the individual vines that have been planted throughout our properties, we have also installed two trellises, which support 20 vines each. These have a constructed wooden edging to hold the mulch and help retain moisture. The ground is then covered with chicken wire to prevent turkeys from digging up the vines. These trellises are similar to the Richmond Birdwing stations that have been constructed at Kenmore High School and at Brookfield. This truly is a joint project, and without the help, encouragement, knowledge, cooperation and enthusiasm of our wonderful two neighbours, this project would be far less advanced.

Last year (2014), I planted 300 seeds, which I collected from my established vines,
into styrofoam boxes. Many are already germinating. When they are big enough, I will pot them up and give them to a registered grower. Because the Richmond Birdwing Vine is listed as Vulnerable under Queensland legislation, you have to be registered to sell mature vines.

Feel free to visit our blogspot at www. foambarkgully.blogspot.com.au, it is worth a look. One of two trellises of Richmond Birdwing Vines in Foam Bark Gully. These mass plantings of vines are part of a project that aims to create corridors forthe threatened Richmond Birdwing butterfly across South East Queensland. Photos by Deborah Metters. Both trellises have constructed wooden edging and are covered with chicken wire to retain moisture and prevent brush turkeys from scratching up the vines.