We have a weed around here called Castor Oil Plant and it comes up all along our creeks. It has large-lobed leaves that makes it easy to recognise and identify. There are all sorts of different common names for native species and weeds alike and I didn’t think this weed was the real Castor Oil Plant but rather some imposter that looked like a plant from ‘the old country’. Much to my surprise, it is the real Castor Oil Plant – the plant we get castor oil from. After investigating further, I have a new found respect for this weedy nuisance. 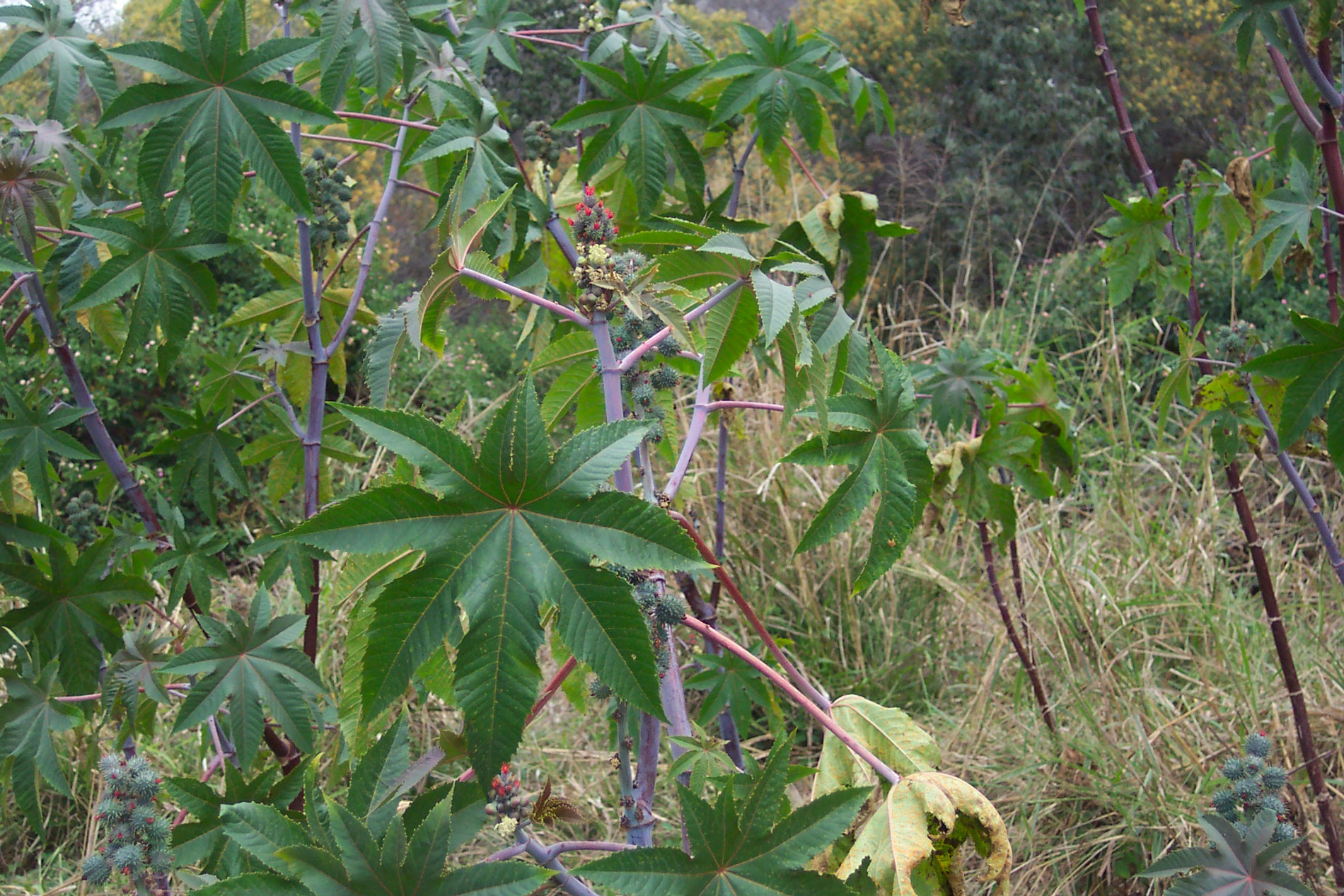 Castor Oil Plant ( Ricinus communis ) is a plant not to be messed with. It packs a powerful punch full of nasty chemicals waiting for the fool-hardy. It also produces castor oil – that tormentor of small children with any hint of constipation or bad temper. “You need a good dose of castor oil” is sure to send shivers up many an old person. Happily it is not used for that anymore (I hope).

Castor oil works as a laxative and purgative. The main ingredient, ricinolein, is a triglyceride (or triple-chain fatty acid), which can cause cramping in the bowel. It is usually safe but using too much is life- threatening due to chronic dehydration. A small Castor Oil Plant that should be able to be hand-pulled if the soil is soft. Photo by Andrew Willis. The plant contains a number of mild toxins, some allergenic, and one real snorter, mainly found in the seed. Ricin is the lethal toxin in castor oil seeds. It is lethal to humans and stock. Ricin attacks the ribosome in cells, preventing the production of essential proteins, thus causing the cell to die. The seed is only toxic if the outer shell is broken and the seed is chewed. Ricin is thankfully destroyed by heating during the oil extraction process.

Castor Oil Plant is a member of the Euphorbiaceae family. It is a shrub to 3 metres, with large multi-lobed leaves (7-9 lobes) and red branches. Leaflets are toothed. Flower spikes contain separate female and male flowers. The female flowers have prominent red stigmas. Seed pods are green, round, spikey balls that explode when ripe. Seeds have a ‘caruncle’ – a handle for ants to grab and carry them away. Using ants to spread seeds is called ‘myrmecochory’.

Castor Oil Plant originates from the Mediterranean, East Africa and India. It is grown commercially mainly in India, China and Brazil. Picking the crop can lead to long term health problems due to a build- up of toxins, and I doubt if there are many old castor oil pickers.

The weed has now spread around the world in tropical and subtropical areas, especially along waterways. Treatment is by hand-pulling (wearing gloves of course, and don’t eat the leaves) or by foliar spray or cut-stump methods. Talk to your Land for Wildlife Officer about specific herbicides for Castor Oil Plant. I do wonder what, if anything, all this ricin from Castor Oil Plants is doing to our aquatic and riparian ecosystems?

Thankfully we no longer live in times when “everyone needs a good dose of castor oil”, as the cure might be worse than the disease.